On 13 September 2020 the United Arab Emirates (UAE) and Bahrain signed peace agreements with Israel at a ceremony at the White House.  Since then Sudan and Morocco have concluded peace deals with Israel.  This is a major step towards there being peace in the Middle East.  It is also a major step in the fulfilment of Bible Prophecy too.

That the UAE and Bahrain would make peace with Israel is in Bible Prophecy. In Ezekiel Chapter 38 a prophecy is given of Russia leading a confederacy of nations, including Europe, Iran and Libya to invade and destroy Israel.

The prophecy refers to the nations 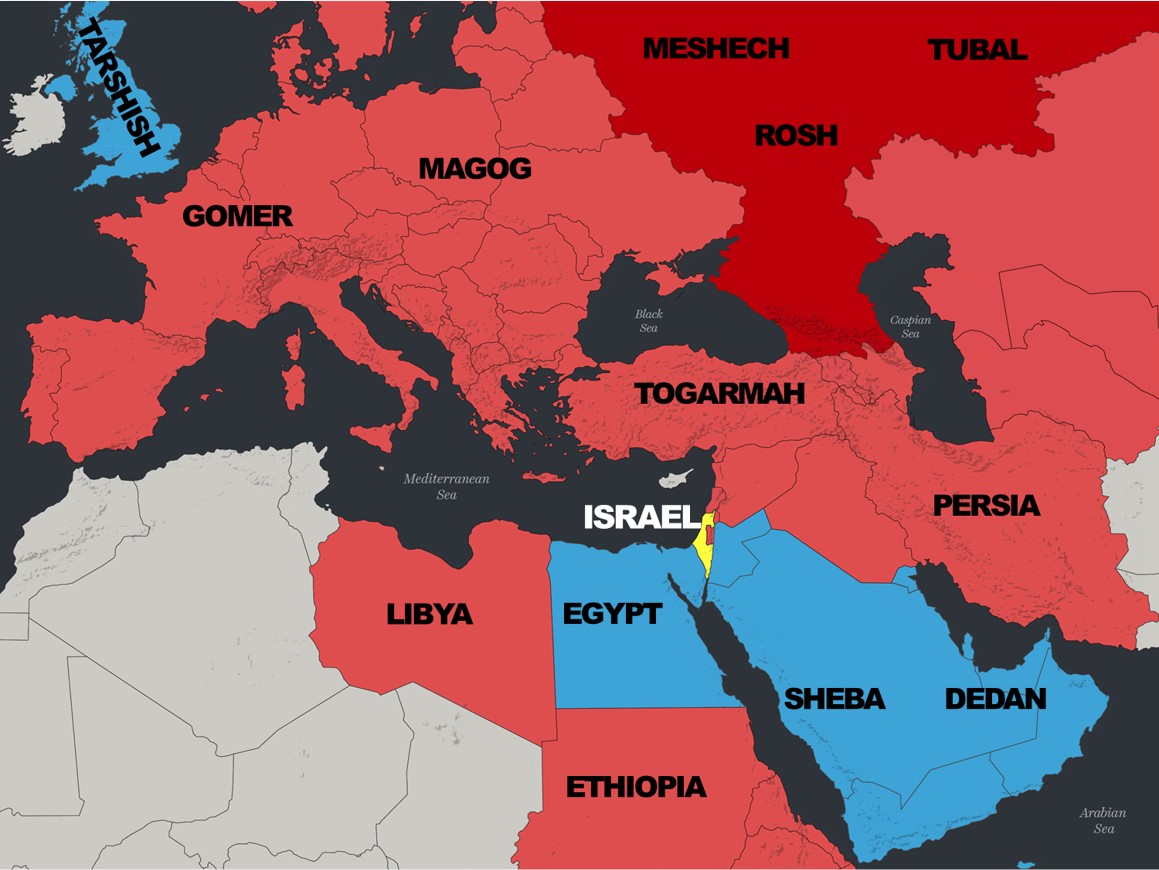 involved by their ancient names. In the map, the nations shown in shades of red invade Israel and the nations in blue oppose that.  In verse 13 of Ezekiel 38 it states:

(NKJV) “Sheba, Dedan, the merchants of Tarshish, and all their young lions will say to you, ‘Have you come to take plunder? Have you gathered your army to take booty, to carry away silver and gold, to take away livestock and goods, to take great plunder?’”

The UAE and Bahrain are part of the “Sheba and Dedan” area of the Arabian peninsula.  The prophecy shows them as opposing the confederacy invading Israel.  The UAE and Bahrain were haters of Israel up until recent years. They and other Arab nations wanted Israel to be wiped off the map.  Now they realise that Iran is a bigger enemy and they have now sided with Israel.  What a change!  But it was prophesied 2500 years ago by God through the prophet Ezekiel that this would happen.  Now it has happened!

The great battle of Ezekiel chapter 38 is just about set to happen. There is more information on the Russia’s next move page.  This great battle will be a world war, so none of us can avoid it.  In fact most of the world’s population will die in that war.  But if you are baptised into the truth of the Gospel (see the Gospel page) you will be saved from the war and can live for ever in the kingdom of God.   THe kingdom of God will be a 1000 year period of peace and happiness.  For more information on the Kingdom of God page