When the word Armageddon is used in the news media and movies, likely, images of a major catastrophe spring to mind.

To gain a true understanding of what Armageddon really means, requires turning to the Bible, because Armageddon is a Bible word.  It also requires looking at how the word is used in the Bible.

The word Armageddon is found in the Bible here:

Revelation 16:16 “And he gathered them together into a place called in the Hebrew tongue Armageddon.”

Now to understand what Armageddon involves, it is important to look at the context.

v14 For they are the spirits of devils, working miracles, which go forth unto the kings of the earth and of the whole world, to gather them to the battle of that great day of God Almighty.
v15 Behold, I come as a thief. Blessed is he that watcheth, and keepeth his garments, lest he walk naked, and they see his shame
v16 And he gathered them together into a place called in the Hebrew tongue Armageddon
v17 And the seventh angel poured out his vial into the air; and there came a great voice out of the temple of heaven, from the throne, saying, It is done.

From v14 it is evident that Armageddon is connected with a battle, and this battle involves the whole world.  Furthermore God almighty is involved in the battle. In v15 the “I” that comes as a thief  is Jesus Christ.  The book of Revelation is the words of Jesus Christ and he refers to himself in the book.  Eg: Revelation 22:16 “I Jesus have sent mine angel to testify unto you these things ….”  Also Revelation 1:1

The “I” that will “come” is referring to the return of Jesus Christ to the earth. (For more information this see our page on the return of Jesus Christ) This tells us that Armageddon happens around the time when Jesus Christ returns to the earth.  He also says he is coming as a thief.  This would indicate Jesus Christ’s coming is sudden and unexpected.  Thieves don’t normally advise in advance that they are coming to your home.  Jesus’ reference in verse 15 to the need to “watch” is telling us that we need to be ready for his coming and not to be caught in shame living an ungodly life when he comes.  Jesus uses similar words in the gospel of Matthew, which also has the context of his return as a thief:

Matthew 24:42 “Watch therefore: for ye know not what hour your Lord doth come. But know this, that if the goodman of the house had known in what watch the thief would come, he would have watched, and would not have suffered his house to be broken up.  Therefore be ye also ready: for in such an hour as ye think not the Son of man (a title of Jesus) cometh.“

In summary, v14 & 15 shows that Armageddon is in the context of a major war at the time when Jesus Christ returns.  V17 shows that this time of Armageddon is when “it is done”.  That is when the end of the world as we know has come. 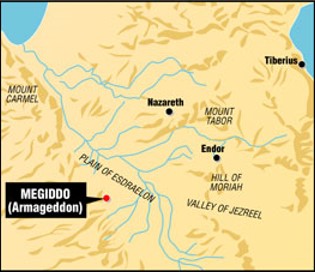 There are two major problems with this interpretation:

Instead, Armageddon can be broken up as three Hebrew words:  Arma – ge – don

When Armageddon is understood to be made up of these three words it opens up connections to other end-time prophecies.  For example Joel chapter 3.

The words in bold are the same concepts in the meaning of Armageddon.  The location of the Valley of Jehoshaphat is on the east side of the old city of Jerusalem (the extension of the Kidron valley).

What Joel chapter 3 presents is the flow of events around Armageddon.

V1 – Restoration of Judah and Jerusalem (which happened in 1948)
v2 – Gathering all nations to battle to Valley of Jehoshaphat (Revelation 16:14 refers to all nations coming to battle)
V3 – Opposition from Tyre & Sidon (Southern Lebanon – location of Hizbolah) and coasts of Palestine (Gaza strip – location of Hamas)
V9/10 – Proclamation of war
V14 – Nations threshed (at Jerusalem)
V16-18 – God intervenes and then the kingdom of God commences.

There are other Bible prophecies that give more detail about Armageddon too.  For example Ezekiel 38 where it describes the nations that will come up to battle in Israel.  For more information see the Russia’s Final Move page.