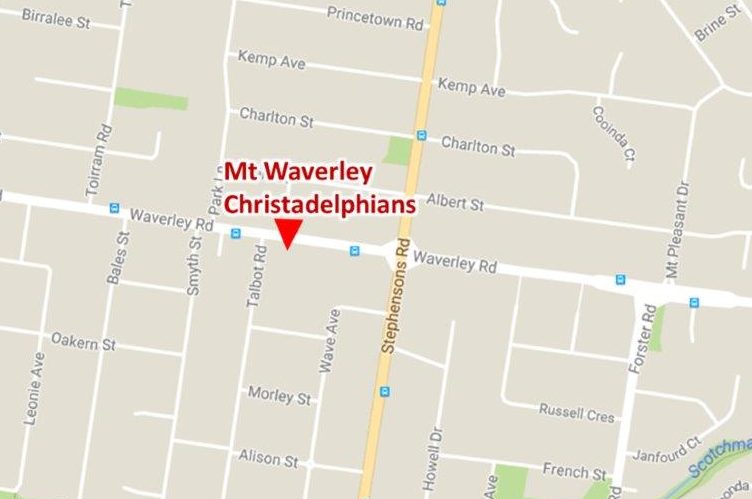 Christadelphians can be found in almost all countries of the world.  There are some 150 congregations or Ecclesias (the New Testament word for ‘church’)  in Australia, of which 12 are in Melbourne – more information here

This website is operated by the Mt Waverley Christadelphians who meet at 354-358 Waverley Rd, Mt Waverley, Victoria (see map).

The name Christadelphian is compounded of two Greek words; Christos and adelphos, and signifies Brethren in Christ.  The term is used in the Bible to identify true believers who do the will of God.  (See Matthew 12:50; 23:8, Hebrews 2:11-12).  In adopting this Scriptural name the brotherhood has constantly before it the high ideals that Christ set before men. Christadelphians do not profess to have received any new revelation, nor to have any specific commission, but maintain that the Bible in both Old and New Testaments is able to guide a person to salvation.

Following the example of the Apostles

Christadelphians have no paid ministry, no robes or elaborate ceremonies, nor is there any “head of the church” or legislative council. Our ecclesias are autonomous and organise their own affairs. Like the “elders” of New Testament times, members are appointed to manage the affairs of the ecclesia and to preside at its meetings.

We meet on Sundays to remember the death and resurrection of Jesus Christ at a meeting referred to as the “breaking of bread”.  There are hymns, prayers, readings from the scriptures and an exhortation. The bread and the wine circulate among all the “brothers and sisters” present. Voluntary collections are taken to meet all the expenses.

Like Jesus’ early disciples, Christadelphians proclaim the Gospel message of “the things concerning the kingdom of God and the name of Jesus Christ” (Acts 8:12) to all willing to hear.  We instruct our children and young people in Sunday Schools and Youth Groups, and promote a life of faith and prayer, and obedience to Christ’s commands, among our members.

The Christadelphian movement in its latter-day manifestation (for Christadelphians have existed in various forms since the time of the Apostles), came into existence through the labours of John Thomas, a medical doctor who was drawn to an independent study of the Bible.  This revealed to him that Christendom is astray from the Bible and set him  on a course of proclaiming its true message.  In 1848 he published a book entitled Elpis Israel in which he incorporated what he had discovered by his own study of the Bible.  John Thomas was not divinely inspired to reveal new teaching; the doctrines he taught had been proclaimed for centuries before him. All he did was to revive the Truth from the accumulation of false teaching that had submerged the Truth since the days of the Apostles.  His studies convinced him that Eternal Life is a gift of God that will be bestowed by the Lord Jesus upon his followers at his second coming and the setting up of the Kingdom of God (Matt 25:31-34, Dan 2:44).  This Kingdom, he learned, will be set up upon the earth when Christ returns; and that the reward of the righteous will be to enter this kingdom and have eternal life.  At that time they will “reign on the earth” in company with the Lord Jesus Christ who will be the King. (Rev 5:9-10).  The destiny of the wicked, he learned, is destruction (2 Thess 1:19) not eternal torments, and that “hell” is the grave, the abode of the dead, where the unrighteous will remain forever.  He found the Bible taught that death came into the world because of sin, and that when sin is personified in flesh, mankind or Governments, it constitutes the devil of the Bible.  The idea that the devil is a fallen angel, as most religions teach, he found to be unscriptural.

Further information on what Christadelphians believe can be found here