The Kingdom of God on Earth

This short video gives an introduction to the subject of the Kingdom of God on the earth.

Now ponder on the absence of religious bigotry or sectarian strife; imagine the benefits of internationally accepted laws, with justice administered by fair-minded yet uncompromising judges. Conjure up a mental picture of life without terrorism and child-abuse; where good-neighbourliness prevails and evil tendencies are discouraged, where governments establish good standards of behaviour, and implement just forms of punishment for wrong-doing. That will be the kingdom of God on earth!

The disciples of Jesus found prayer to God a difficult matter. What to pray for? What are the priorities? Jesus solved their problems by teaching them what we call “The Lord’s Prayer”. It established their priorities for them: God is a Father, the provider. God has a realm in heaven where His will is obeyed; God’s kingdom is to come to the earth. It was a powerful plea to make:

“Your kingdom come. Your will be done on earth as it is in heaven … For yours is the kingdom and the power and the glory for ever.” (Matthew 6:9-13)

Many churches still repeat this prayer. Indeed, “Your kingdom come” should always be on the lips of faithful Christians.

The coming Kingdom of God was also a key part of what Jesus preached.

The Kingdom of God will be established when Jesus Christ returns to the earth.  That Jesus Christ will return is taught in many places in the New Testament.  One example of this is what the angels said to Jesus disciples when he ascended from the Mount of Olives (outside Jerusalem) into heaven.  The angels said that Jesus would return in the same way he went up into heaven: 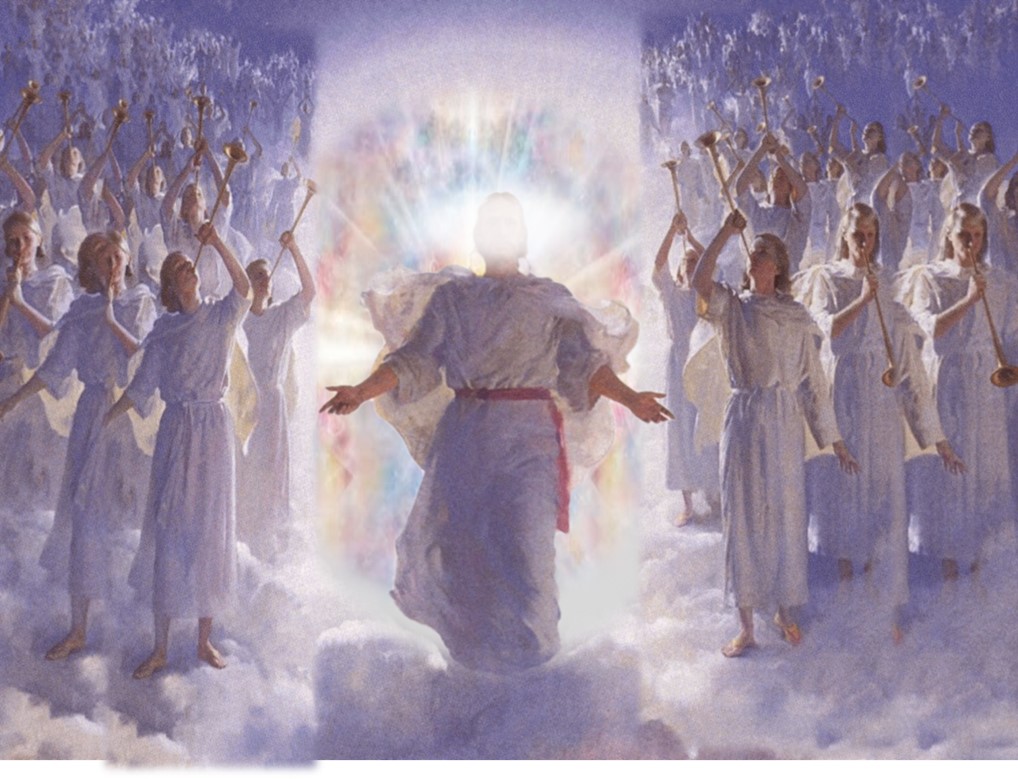 Acts 1:11 Ye men of Galilee, why stand ye gazing up into heaven? this same Jesus, which is taken up from you into heaven, shall so come in like manner as ye have seen him go into heaven.

Matt 25:31 When the Son of man shall come in his glory, and all the holy angels with him, then shall he sit upon the throne of his glory:

The Bible shows that the Kingdom of God will be a real kingdom. This kingdom will be a global kingdom:

Revelation 11:15 “The kingdoms of this world are become the kingdoms of our Lord, and of his Christ; and he shall reign for ever and ever.“

This Kingdom of God will have a King, a territory, a capital city, laws, a government etc – like real kingdoms do.

The King of the Kingdom of God will be Jesus Christ and he will reign as King from Jerusalem.  Before Jesus was born the angel Gabriel came to Mary (his mother to be) and told her that Jesus would be a king and would be given the throne of king David and would rule from  Jerusalem:

Luke 1:31-33 “And, behold, thou shalt conceive in thy womb, and bring forth a son, and shalt call his name JESUS. He shall be great, and shall be called the Son of the Highest: and the Lord God shall give unto him the throne of his father David: And he shall reign over the house of Jacob for ever; and of his kingdom there shall be no end.”

The capital city of this Kingdom will be Jerusalem (also called Zion), but a different city to that of today.  It will be totally changed because of a major earthquake that occurs when the returned Jesus Christ is manifested to the world.

Zechariah 14:8-10 And it shall be in that day, that living waters shall go out from Jerusalem; half of them toward the former sea, and half of them toward the hinder sea: in summer and in winter shall it be. And the LORD shall be king over all the earth: in that day shall there be one LORD, and his name one. All the land shall be turned as a plain from Geba to Rimmon south of Jerusalem: and it (Jerusalem) shall be lifted up, and inhabited in her place,

But this city will also be a place of worship and there will be a grand temple there.  The following quotation shows that people will come to worship at Zion but also the seat of Government will be there because the Law will proceed from Zion too.

Isaiah 2:2-4 And it shall come to pass in the last days, that the mountain of the LORD’S house shall be established in the top of the mountains, and shall be exalted above the hills; and all nations shall flow unto it.  And many people shall go and say, Come ye, and let us go up to the mountain of the LORD, to the house of the God of Jacob; and he will teach us of his ways, and we will walk in his paths: for out of Zion shall go forth the law, and the word of the LORD from Jerusalem. And he shall judge among the nations, and shall rebuke many people: and they shall beat their swords into plowshares, and their spears into pruninghooks: nation shall not lift up sword against nation, neither shall they learn war any more.

The details of the grand temple that will be built when Jesus returns are given in Ezekiel chapters 40 to 48.  An artists impression of this is given below.  The size of this temple is large.  It is 1.6km by 1.6km.  It is very different to the temple of God in the Old Testament.  In this new temple the altar of burnt offering is on a large hill in the middle of the temple.  Water comes out from under the altar and flows down the hill and results in rivers on two sides of the temple. 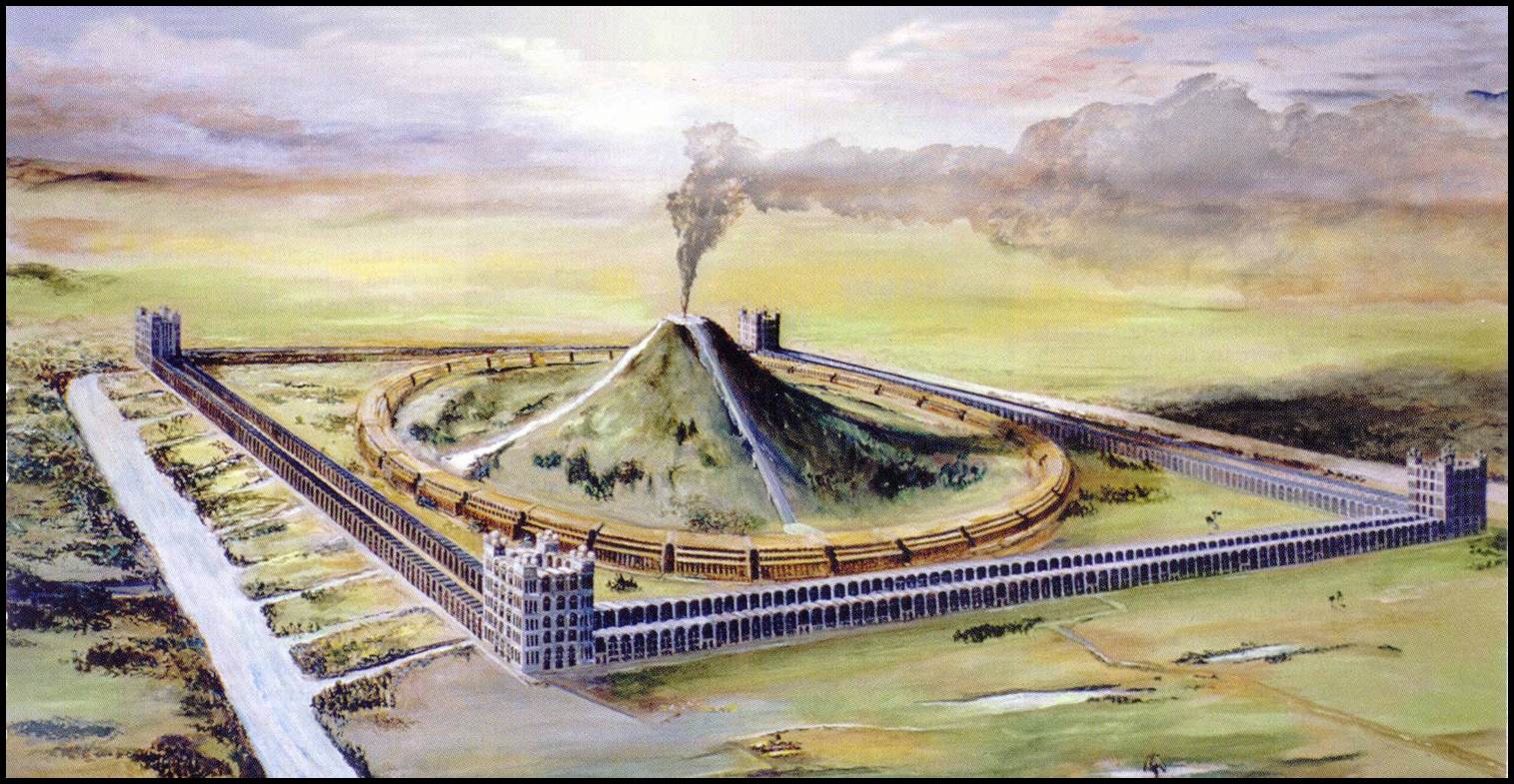 All peoples of the world will come up to Jerusalem to worship once every year.

Psalm 72 describes many aspects of the coming Kingdom of God.  An outstanding feature of this kingdom will be that Jesus Christ will care for people and protect them from being exploited.

Those that have been Christ’s true followers in their life will be rewarded with eternal life in the kingdom of God.

They will also becomes the rulers of the world with Jesus Christ.

Eternal life will convey marvellous benefits on these immortal rulers and teachers. With healthy minds and physically perfect bodies, they will not suffer the crippling effects of disease or disablement: “They shall neither hunger any more nor thirst any more; the sun shall not strike them, nor any heat … and God will wipe away every tear from their eyes” (Revelation 7:16,17). Like their Master, they will “know what is in men’s hearts” and, with the unerring ability to diagnose the source of human problems, will have the capacity to root out troublemakers and to promote trust between neighbours. Think what that could accomplish in some of the world’s present trouble spots!

What a transformation will begin to work its way across the earth when Christ’s immortal administrators are sent out from Jerusalem. New laws, based on Biblical principles, will have the effect of cutting through partisan politics and will rapidly remove the cause of so much bigotry among contesting religions.

The people of the kingdom

The first group will include Jesus, the universal king; Abraham, David and other great ‘worthies’, who will have positions of honour in the empire; the twelve apostles, and the faithful followers of Jesus – the “saints” – who will be the administrative rulers and educators of the new age. The second group will consist of the mortal peoples of the world who, at Christ’s return, survive the judgements on the earth and are willing for Jesus to be their King. This will include Jews who are allowed to live in Israel.

For the second group, the mortal peoples the quality of life will be greatly improved.  They will live long lives.  Isa 65:20 “a child shall die an hundred years old”  So if someone dies at 100 they will be considered a child.

The extended lifespan of men and women will also be characterised by good health.  “Then the eyes of the blind shall be opened, and the ears of the deaf shall be unstopped. Then the lame shall leap like a deer, and the tongue of the dumb sing.” (Isaiah 35:5,6)

More on the Kingdom of God

There is much more in the Bible about the coming Kingdom of God.  There is more information here.

Don’t let this marvellous future slip away from you! Jesus may be here soon. Please, read your Bible, and pray with all your heart: “Your kingdom come. Your will be done on earth as it is in heaven.”