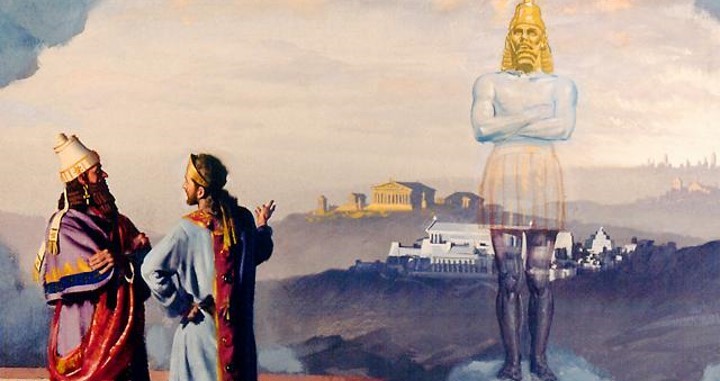 Nebuchadnezzar was the king of Babylon, one of the earliest empires which could be truly called a world empire, influencing all the nations of the then known world. This empire existed about 600 BC. When the armies of Nebuchadnezzar seized the land of Israel, many of the Jewish people who lived there were taken away into the city of Babylon as captives.

Among these was the prophet Daniel, who wrote the book of Daniel in the Old Testament. One night king Nebuchadnezzar had a dream (the incident is recorded in Daniel chapter 2). He saw the statue of an enormous man, whose head was of Gold, breast and arms of Silver, belly and thighs of Brass, legs of Iron, and feet of Iron and Clay. While he watched, a Stone was cut out of the mountain without the aid of hands and it smashed into the feet of the image and then ground it to powder. The stone grew into a great mountain which filled the whole earth.

Although the dream was vivid at the time, when he awoke Nebuchadnezzar himself could not recall it. None of the wise men of Babylon were able to relate the dream to the king and consequently could not give the meaning of it. However, Daniel, the Hebrew prophet was given understanding by God to not only remind the king of his dream but also to unlock the mystery. He said, “There is a God in heaven that revealeth secrets, and maketh known to the king Nebuchadnezzar what shall be in the latter days” (Daniel 2:28).

The dream was in fact a prophecy. It is astounding to look back into history and to see the great accuracy of this prophetic message. We are able to see that it has been fulfilled in part and what is more, it is still being fulfilled TODAY.

The subject matter concerned the events which have taken place over the last 2500 years. It reveals that from the time of the Babylonian Empire there would be FOUR GREAT EMPIRES which would dominate the then known world, and show also that there would be a final end to the rule of man. You will see from an examination of Daniel chapter 2, that each of the metals which composed the image represented a particular world power and we are able to interpret these in conjunction with the words of Daniel and world history. We briefly enlarge upon the salient points under the following headings.

Daniel told Nebuchadnezzar, “Thou art this head of gold”; not Nebuchadnezzar personally, but his empire which was a great dominion over the inhabited earth. Archaeology has since shown how rich this empire was.

Breast and arms of Silver

In about 537 BC, Darius the Mede and Cyrus the Persian joined forces and conquered the city of Babylon setting up in it place the Medo-Persian Empire.

Belly and thighs of Brass

The conquests of Alexander the Great were to finally overthrow the Medo-Persian Empire and to establish the Grecian Empire in about 331 BC. This dominion extended over the territories stretching from Greece to India.

The iron-like power of Rome steadily extended its own influence over the world and replaced the Grecian Empire. The Roman was the strongest of the powers represented by the image and lasted for the longest time. It was eventually divided into two parts, east and west (the two legs of the image), and although much of the western section was destroyed in the 5th century AD by the Barbarians, the eastern half continued in Constantinople until AD 1453 when it finally fell to the Turks.

Feet – part of Iron and part of Clay

Since the Roman Empire there has been no one power which has enjoyed such dominant control of the known world. Search the history books, and you will discover that though there have been many attempts to achieve world domination (eg. Napoleon, Hitler), yet these have all failed. The result of this has been a situation in the earth of a mixture of strong nations (IRON) and weaker nations (CLAY), and as iron and clay do not mix so these powers will not be joined together.

We are living today in the “feet stage” of the image vision. Just as all the stages of the prophecy have come true, so also we can expect the destruction of the image by the STONE Who then is the stone? The Bible itself reveals who the stone is. Jesus, quoting the Old Testament and talking about himself said, “The stone which the builders rejected, the same is become the head of the corner: … And whosoever shall fall on this stone shall be broken.. but on whomsoever it shall fall it shall grind him to powder” (Matthew 21:42-44).

This is speaking of the same time as that we find in Daniel 2 (speaking about the smashing of the image on its feet), “In the days of these kings shall the God of heaven set up a kingdom, which shall never be destroyed… but it shall break in pieces and consume all these kingdoms, and it shall stand for ever.” (Daniel 2:44).

This prophecy, made long before the time of Jesus, has been fulfilled IN ALL BUT THE FINAL STAGES. Because of this, can we not have CONFIDENCE that the final outcome will be as described by Daniel, ie. the setting up of God’s kingdom? We therefore wait for the time when the sure word of prophecy will be fulfilled and Jesus will return to the earth to sit upon God’s throne in Jerusalem ruling the nations of the earth. While we wait, would it not be wise to find out more about God’s purpose? If we do this we will discover that he is a rewarder of them that diligently seek him.